The Ship of Kyrenia

You are here: History & Heritage1 / The Ship of Kyrenia

Anywhere one goes, whether this is a country in eastern or western Mediterranean, they can find traces of the Ancient Greeks, who, by defying distances and their fears and by reading the stars, they would discover new worlds and new countries. The ancient Greeks passed the Greek culture and civilization down to the entire world. 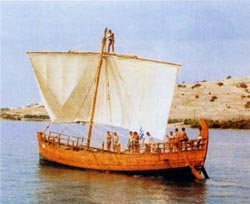 The island of Aphrodite was among the places the Greeks visited early, loved and inhabited. The northern coasts of Cyprus were named the Coasts of the Achaeans and it was where Cepheus, Praxander and other Achaean compatriots of theirs founded Kyrenia, Lapithos and other housings in the northern part of Cyprus.

As years went by, the residents of the Achaean Coasts built villages, cities and their history with their own sweat and blood, while during turbulent times they had to help Digenes defeat Charon, they escorted Regaena to her castles and enjoyed the results of their achievements and labour among the scents of the lemon trees and the carob trees. Ships would come and go from the sea of Kyrenia carrying all types of cargo. Many times the sea would also bring conquerors, but none of them would stay for long. The Kyrenians, just like all other Cypriots, would gain their freedom even after centuries of slavery by not losing their faith in God and their will.

A commercial 15-metre long ship built in 389 B.C. used to visit the port of Kyrenia regularly coming from the Aegean islands and even reaching the coasts of Syria and Palestine. In around 288 B.C. the ship, carrying 29 mill stones, 380 amphorae and a load of 10000 almonds and other products, as well as a four-member crew, sailed from the port of Kyrenia heading towards its next destination. However, it sank just three miles from the port. The Kyrenian sea “kept it tightly into its arms” for more than two thousand years, until our compatriot late Andreas Kariolou discovered it opposite the coast of Chrysokava in 1965. Fifty-four archaeologists, divers and other scientists worked for three years in order to raise, reassemble and finally display the ship at the Castle of Kyrenia, thus reviving its history and linking the era of Alexander the Great and ancient Cyprus with the present. 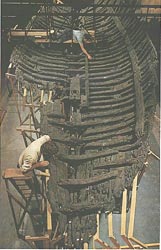 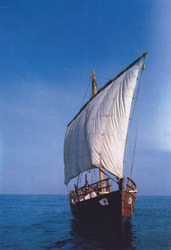 The discovery of the ancient shipwreck of Kyrenia, as well as the scientific studies which followed and still continue to be conducted, created an important opportunity for the ancient naval architecture and navigation to be studied.

Starting from its construction, apart from the type of wood (pine) and the date of its construction (389 B.C.), we have managed to learn about the traditional method of ship construction of that time, which included the ancient carpenters first building the external part of the ship known as planking, before building the interior and the oarlocks which in turn constituted the ships structure. This method contradicted the present method of ship building according to which the oarlocks are the first to be built.

Moreover, it has been proven that approximately eight years after its construction the ship underwent repairs, possibly two or even three times. This was proven using the radiocarbon dating method which revealed that various parts of the ship had been built using wood of various ages.

Despite carrying 380 amphorae which were basically of Rodhian type, in the end smaller numbers of seven types of vessels which served both the commercial activities of the ship, as well as the personal needs of the four-member crew, were raised. Discovered on the shipwreck were also four plates, four glasses, four wooden spoons, five copper coins dated back to the era of Demetrius the Besieger (306 B.C.), traces of food supplies (lentils, figs, grapes and olives), an iron key with eight side notches and an iron grill which was either used for cooking or drying the fish or other type of food under the sun.  In addition, the fact that the spikes of spears were found stuck at the lower external part of vessel’s hull created the suspicion that it had sunk due to a pirate attack. However, most believe that the ship sank after its cargo was dısplaced during a sea storm.

Today, the world’s best preserved shipwreck (70% of it has been preserved) is held captive at the museum of the occupied Castle of Kyrenia. No matter how hard the Turkish invaders try to alter the historic truth regarding the origin of the wreck during the tours they organize, our captive ship will continue to constitute an undisputable testimony proving the timeless bonds between Kyrenia and Greece, as well as a symbol signifying the return of the Kyrenians to their beloved city and district.

Excerpts from a book by Takis Neophytou