You are here: History & Heritage1 / Churches 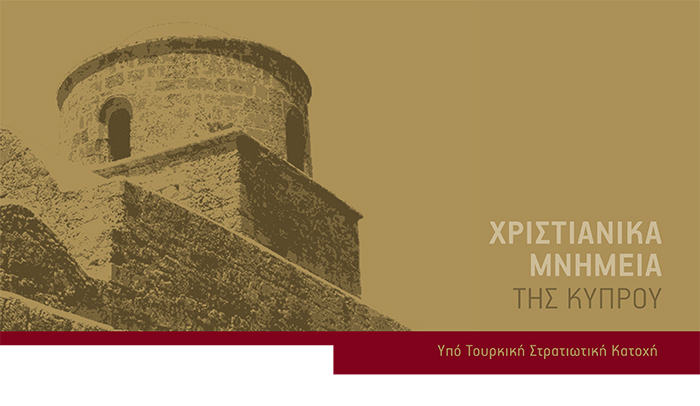 The medieval church of Agia Aekaterini is located in the area of Chrysokava, within close proximity of the coast and northeast of the carven church of Agia Mavri. It is a single-roomed arched church of small dimensions which Gunnis dates back to the 15th century. Gunnis also mentions a tomb which protrudes towards the exterior of the southern wall and which is thought to belong to the owner of the church. On the southern wall there was a stony relief cross placed on the entrance header. The locals used to pray at the church asking Virgin Mary to protect their sailors. For this reason, there is some confusion among the sources, since some of them claim that the church was dedicated to Panagia Chrysokava, protector saint of the seamen. Tarsouli notes when mentioning this church that the women of Kyrenia used to hang the sheets of the newlyweds’ bed to dry after being washed. This way, the marriage was blessed and Panagia would make it solid. Outside the church Tarsouli also mentions that there used to be a wild fig tree, on the branches of which people used to hang ribbons and clothes of young children as oblations.

The present state of this church is unknown since the area where it is located constitutes a no-access zone controlled by the Turkish army.

The Church of Agios Georgios (Parish)

The church is located in Pano Kyrenia, at the junction of Agiou Georgiou and Namik Kemal Streets, and constitutes one of the two parish churches of the city.

According to its construction inscription, the foundations of the church of Agios Georgios were laid by the people of Pano Kyrenia in 1917, on top of the ruins of an older church, possibly a medieval one. What we also need to take into account is that Pano Kyrenia, also known as Riatiko or Royiatikon, constituted a royal estate during the medieval years. The completion of the church was achieved in 1924 thanks to the generous donations made by Georgios Michaelides (Hadjiyiorki) and his wife Maria from the village of Thermia and while Makarios Myriantheas was bishop of Kyrenia.

Architecturally, the church is a single-roomed basilica whose upper construction consists of three ogive cross-domes with reinforcing arcs. The reinforcing arcs end in mounts on the northern and southern wall of the church.

On the Holy Bema arc there is a three-lobed window. On the edges of the arc protrude jambs made of cornerstones which are connected to each other with arcs which in turn create blind arches.

These neoclassic elements which characterize the openings add grace to the external look of the church, making its large surfaces lighter and thus establishing the church as a neoclassic monument.

Internally the church was gilded using white plaster filler, while it lacks hagiographies, which is a distinctive feature of most churches of this type. Until today the church continues to maintain its ecclesiastical utensils, its furniture and its wooden iconostasis with the portable icons awaiting for the return of the Kyrenian people so that a mass can take place there again. Renovation works have recently begun at the church of Agios Georgios where, according to verbal testimonies dated prior to 1974, even Turkish Kyrenians would respectfully lit their candle. 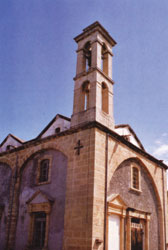 The local cemetery, which is dated back to the Late Antiquity Christianity, known as Chrysokava, is located east of the medieval castle of Kyrenia. It is an area with ancient quarries which were used by the first Christians of the area for their worshipping needs and their burials by using already hewn tombs dated back to the Roman times or by hewing new ones. Crosses and other Christian symbols are evident on the arcosolia of the tombs, which constitute the most ancient Christian remains of the Kyrenian district.

Hagiographies dated back to the 10th century, which stylistically resemble respective hagiographies of Cappadocia, had been salvaged at the chapel of Agia Mavri. Salvaged on the random and shallow dome above the tomb – altar was a potsherd of a hagiography which depicted the right arm of Christ giving a blessing. Below the arm of Christ, remains of hagiographies depicted the head of Archangel Gabriel on an ochre-coloured medal. Another part on the left top side of the hagiography, which was also salvaged, depicted the chest of an angel with an ochre cord on a light-blue medal, something which reveals that on this hagiography Christ used to be circularly surrounded by several angels on medals. Effectively, this meant that the hagiography represented the Almighty Christ, constituting the earliest monumental art of Cyprus. Depicted on the dome on the roof of the burial chamber, which is, in fact, the main part of the chapel, is the Ascension of Christ. Christ, who dominates the entire composition, sits on a rainbow and is surrounded by an oval blue glory under the stars. The glory is withheld by four angels. The drapery is linear with a lack of plasticity. The Ascension scene continues on the side walls of the hewn chapel.

Today, what has become of the semi-hewn chapel, which was salvaged until 1974 in a semi-ruined condition, is unknown since it is located in an inaccessible zone controlled by the Turkish army.

It is located at the lower part of the mountain slope, northwest of Tzyklos. It has been mentioned that ecclesiastical utensils were found buried in the chapel.

Church of Agion Steganon
This ruined chapel is located on the banks of the river of Kyrenia, around 1500 metres away from the coast and near the estate donated to the Municipality of Kyrenia by Mitzis.

The church is built on top of the ruins of an earlier medieval church and is located west of Aristeidou Street and east of Isokratous Street. It was renovated by Georgios Rossides a few years before the Turkish invasion. It is a single-roomed arched church with a rectangular floor plan, to which the semi-circular arc of the Holy Bema is added. It was built of reinforced concrete and painted with a white colour. On the southeast corner of the church used to stand a small bell tower. The church features windows and entrances with low arches. Today, the chapel has been converted into a mosque and a metal pyramid has been added to its bell tower turning it into a minaret. 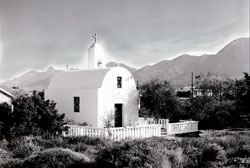 Opposite Mannifort’s mansion, at the end of Elladas Street, there used to be a small chapel dedicated to Agios Georgios. A small underground building with dimensions of 2×2 metres still remained standing in 1974.

The chapel is built on the west coast of the city of Kyrenia, north of the road which leads from Kyrenia to the village of Agios Georgios. According to a version, the church was named Glykiotissa (Sweetening) because it eased the suffering of those who turned to Panagia for help. A second version relates the naming of Panagia with the sweetness of its holy water which streamed by the sea. Glykotissa is also known by the name Chrysoglykiotissa, Chrysopolitissa and Chrysokava, which refers to the coating of heirlooms of the churches and the sheathing of icons of pilgrimages. 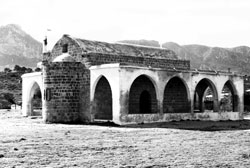 The church used to be the old Bishopric of Kyrenia. It is located on a height of the city, above Tripiti, west of the Muslim mosque and very close to the port. The northern side of the church appears to be part of the original building which was possibly built during the Frankish occupation. The masonry consists of square limestone.

During the Turkish occupation the church was expanded towards the south and became a double-roomed.

According to an inscription on a shield below the icon of Christ, which was placed on the elaborate wooden iconostasis, the church was renovated in 1783. Part of the inscription was salvaged by Rina Katselli and Christodoulos Pachoulides. The subsidiary buildings surrounding the church, as well as an olive mill, were possibly also renovated at that time. These rooms were used as accommodation facilities for the priest of the church and the Bishop of Kyrenia, when he was in the city, while they also hosted the school of the area. There were also rooms which accommodated foreign visitors who used to arrive from the opposite coast or even further, from Kiev and other parts of Europe where Orthodox Christians live. In fact, it was at the church of Panagia Chrysopolitissa where the Martyr Bishop of Kyrenia Lavrentios was arrested before being butchered by the Turks in 1821 in Nicosia. The northern door, from which Lavrentios exited the chapel, was sealed in order to remind the tortures that he had undergone.

The icons of Christ and Panagia, which used to be placed on the church’s iconostasis, were of Russian style. There were two more important icons, that of Agios Ioannis Prodromos (Saint John the Forerunner) depicting the Saint holding his head in a platter (15th century) and that of Agios Ioannis Theologos holding the Gospel with his left arm, while depicted above him is his symbol, the eagle (16th century) placed on a side right slot of the iconostasis, which communicated with the Altar. Eight small icons placed in the mullions of the iconostasis were dated back to the 17th century. Reference to these icons was made by Athina Tarsouli: The Annunciation, the Presentation of Virgin Mary, the Pentecost, the Transfiguration, the Assumption of Virgin Mary, the Ascension, Agios Nicolaos and the Three Hierarchs.

The church was abandoned on July 20th 1974, it was then looted and its roof collapsed. Of the wooden painted iconostasis only its post still stands in its place and even this is in a very bad condition since its constantly exposed to the weather conditions. Recently, the windows in the northern side of the church were sealed using rocks. 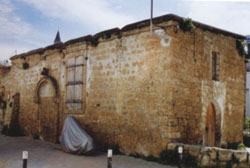