The occupied castles of the Kyrenia District

The northern part of Cyprus has attracted conquerors throughout the centuries and mainly Saracens, who, using their pirate ships, would approach the coasts and loot the island. For this reason, found in the northern part and more specifically on the Mountain Range of Pentadaktylos were a series of fortresses used for the island’s defense.

Three powerful fortresses, namely those of Agios Ilarionas, Voufavento and Kantara dominate in the northern mountain range of the island. Even today people are awed seeing the huge boulders which were used for the construction of the fortresses which stand on the steep rocks utilizing only primitive technical construction aids. However, putting so much work and efforts into their construction was totally justified considering that these fortresses were also used as lookouts from where one could monitor not only the Mesaoria plain, but also spot the Saracens’ ships long before they could reach the coasts of Kyrenia.

Once the guards were able to spot enemy ships in the horizon, they would use lights to signal the other fortresses and using this “visual telegraph”, as one could call it, they managed to warn the other guards of the kingdom about the upcoming danger.

The fortress of Agios Ilarionas played a huge role in the successful defense of the area since it was built on a mountain peak and on an altitude of 2.200 feet. Its name derived from Agios Ilarionas, a hermit who lived back in the 6th century and who, while in search for peace and rest, came to Cyprus and spent the last five years of his life on this mountain peak. 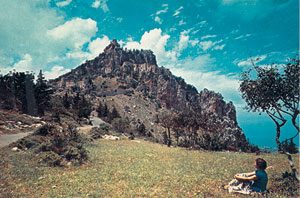 Later, during the 16th century, the Byzantines built a church here which was dedicated to Agios Ilarionas and which later became a Monastery. However, during the Frankish occupation the entire building was converted into a powerful fortress with crenellations and strong bastions which, combined with the natural protection the fortress enjoyed by the rocks and cliffs, established this fortress as an unconquerable. The fortress included barracks for the army and the guards, food storage rooms, gun mounts, barns for the horses and water tanks used to store water.

The Kings’ quarters were located at the highest level of the fortress, on the edge of the cliff. This palace used to receive visitors such as kings along with their queens and courtiers in an effort to protect themselves against terrible diseases or enemy raids.

Thousands of workers, craftsmen and engineers worked for the construction of the fortress by using both the power of their mind and body to “subdue” the hard rock and create one of the best fortresses of the Medieval times.

The word “Voufavento” is Italian and refers to those who defy the winds. The fortress of Voufavento was justifiably given this name since the winds blowing in those high altitude areas are really strong.

Today, the only remains of the old and unconquerable fortress consist of one or two ruined halls which resemble an eagle’s nest built on an inaccessible mountain peak.
And yet, during the Frankish occupation the fortress was a bustling palace for the kings and the presence of knights added to its glory. It was even used as a safe shelter during turbulent times or even as a place of punishment or as a prison for the exiled and rebels. However, what appears to have been its most important role was that of the lookout. From its peak people could monitor what was happening not only in the surrounding peaks, but in the sea stretching before them. The fear for the Saracen pirates would disturb the sleep of the people and their kings throughout the ancient times.

The Castle of Kyrenia

The gorgeous small district of Kyrenia stretches along the coast and on the foothills of Pentadaktylos. Small in land expanse, the district is rich in history, with numerous monuments dated back to the historic times, something which provides solid testimony on the adventures and lethal dangers our country has been through over the previous centuries. Unconquered stony castles constitute “witnesses” of both happy and terrible moments of the past, among them the castle of Kyrenia. 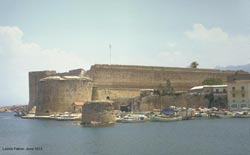 The castle, with the four large towers connecting the high city walls, dominates the scenery at the small port area of the city. Once inside the extremely spacious castle, one gets the impression that they are standing in an old deserted city.

The castle is by itself a very resistant stony construction built to withstand the salinity of the sea, as well as attacks by enemies who besieged it from time to time from both land and sea. It was truly unconquerable since no enemy had ever succeeded in conquering it during a raid.

The existence of several large high-ceiling halls with windows overlooking the sea and adorned with the blazons of noblemen reveal that the castle was not only used for the defense of the area, but also as a place of stay for many people.

Its history dates back to the very ancient times. Its foundations were laid by either the Roman or the Byzantine emperors. Several historical people and conquerors linked their names to the castle of Kyrenia.

The Franks renovated it and added chambers for the knights, the kings and their families. The Venetians reinforced it even more, but their reign was also temporary since in 1570 the golden-sewed Frankish and Venetian pennants were replaced by the red flag of Islam.

And the succession of conquerors continues.

We know that in 1878 the British bought the island and their conquer lasted until 1960. During the liberating fight of Cyprus against the British the castle was used as a prison, where the conquerors would imprison many brave men of EOKA.

The flag of the Republic of Cyprus first fluttered at the castle in 1960, when Cyprus was declared an independent state. During the last few years before the Turkish invasion, foreign and local visitors were attracted to the castle by the special hall where the Greek ship, which had been found sank in the sea of Kyrenia and at a distance of 800 metres from the castle, had been displayed after being assembled by foreign scientists.

It was a commercial ship dated back to the 4th century B.C. and several vessels, coins and utensils were found in it. Today, almost four decades after its discovery, it still stands in the castle of Kyrenia to remind the Turkish invaders of the genuine Hellenic character of the city which they violently conquered.

Scroll to top
We use cookies to ensure that we give you the best experience on our website. If you continue to use this site we will assume that you are happy with it.OKCookie Usage